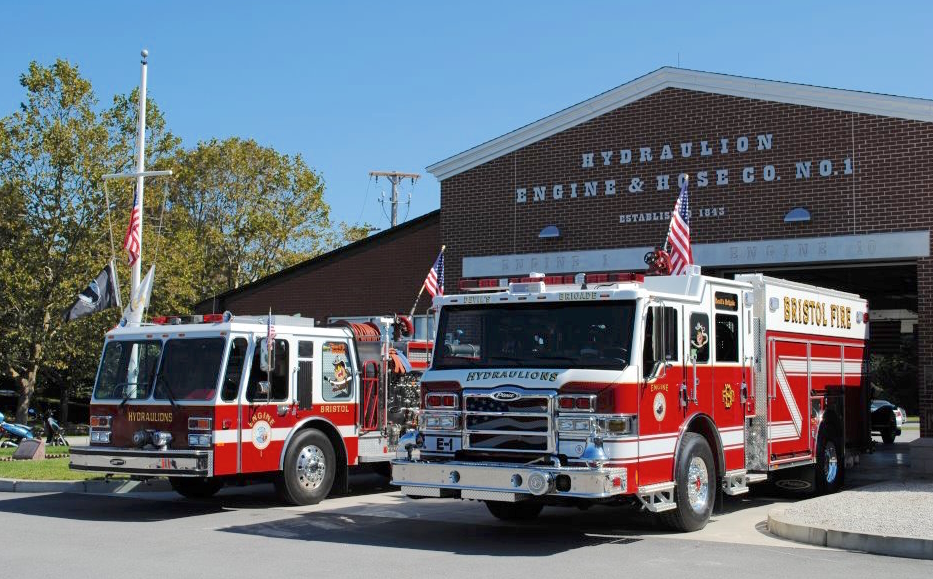 The Hydraulion Engine and Hose Company Number 1 was first organized on May 11, 1836 during a town meeting. The company was formally organized on July 22, 1843.

On November 13, 1988, the fire company moved to its present location at the corner of Annawamscutt Drive and Metacom Avenue. 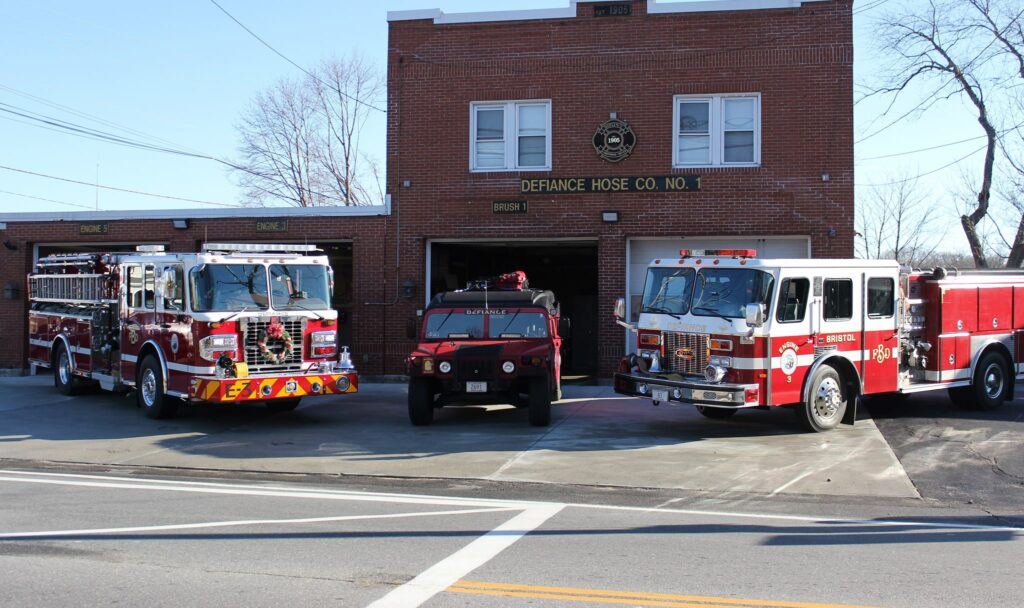 The Defiance Hose Company Number 1 was organized May 31, 1905 and remained housed on the bottom floor of a one room school house until its new, and present quarters, were occupied in April 1929. In June 2005, the company celebrated its 100th Anniversary.

The company published a 134 page book outlining its rich history during the past century. This historical document is now available for purchase by contacting the company. 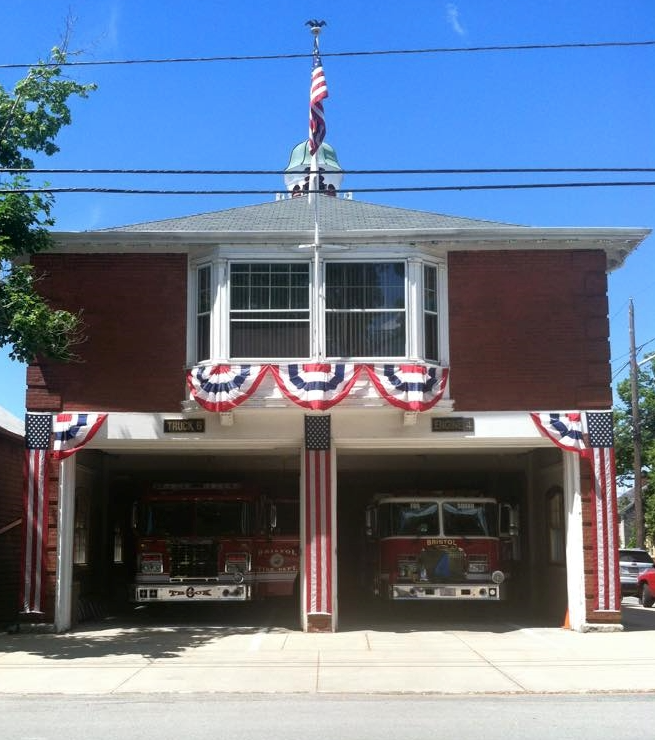 The Dreadnaught Hook, Ladder and Hose Company No. 1 was founded on August 2, 1869.

The Dreadnaught Hook, Ladder and Hose Company No.1 proudly protects 22,493 people (2020 US Census Bureau) living in an area of 10 square miles in Bristol, R.I. This station is centrally located in the historical downtown district and protects a primarily residential area.

Our department is a public department whose members serve in a volunteer capacity. We have an ISO rating of 4 (as a department).
The Dreadnaught Hook, Ladder and Hose Co. #1 is one of four fire stations/companies (the other three are engine companies) and the Division of Emergency Medical Services; proudly protecting the Town of Bristol, R.I.. Our apparatus includes Ladder 1, Heavy Rescue “Truck-6”, Marine 1 and Marine 7.

We proudly share our station with the Engine 4 “Fog Squad” (consisting of members from the four fire companies, including ours). The Dreadnaughts are known to be the busiest of the four fire companies; with at least one of our four apparatus (not including E-4) responding to most fire call dispatches, motor vehicle accidents, maritime incidents and assisting EMS personnel with forcible entry into homes or businesses, or with technical rescues.

From the archives of the Bristol Phoenix “…Saturday Morning, August 7, 1869 the following was reported “… The Regular Monthly Meeting of The Town Council and Court of Probate was held in the Town Council Chamber on Monday afternoon last. Present – the full board…The Chief Engineer of the Fire Department presented his quarterly report which was read and placed on file. From this report we learn that the apparatus belonging to the Fire Department is now in good order, together with the hydrants that the water pipes have recently been repaired and with the connections just laid are amply sufficient to furnish a supply of water in the compact part of the town. The report further states that a Company has been formed under the name of “The Dreadnot Fire Hook and Ladder Company,” consisting of seventeen men under the command of Clark Straight, and recommends that they be received into the Department. In relation to the hose and ladder , which was ordered by the town to be purchased under the direction of the Fire Department, the report says: “Mr. Geisler promises to have the hook and ladder truck complete and ready for use in just two weeks from this second day of August, 1869, provided the weather is favorable and it don’t rain, no one be taken sick or get hurt, and he can get it done at the time…” (Unknown, 1869) https://bristol.advantage-preservation.com/viewer/?k=dreadnot&i=f&d=01011833-12312020&m=between&ord=k1&fn=bristol_phoenix_usa_rhode_island_bristol_18690807_english_2&df=1&dt=3
Unfortunately the names of our founding members were lost to time, due to a horrific fire which destroyed all of our original records, and company belongings on the day of March 9, 1899. 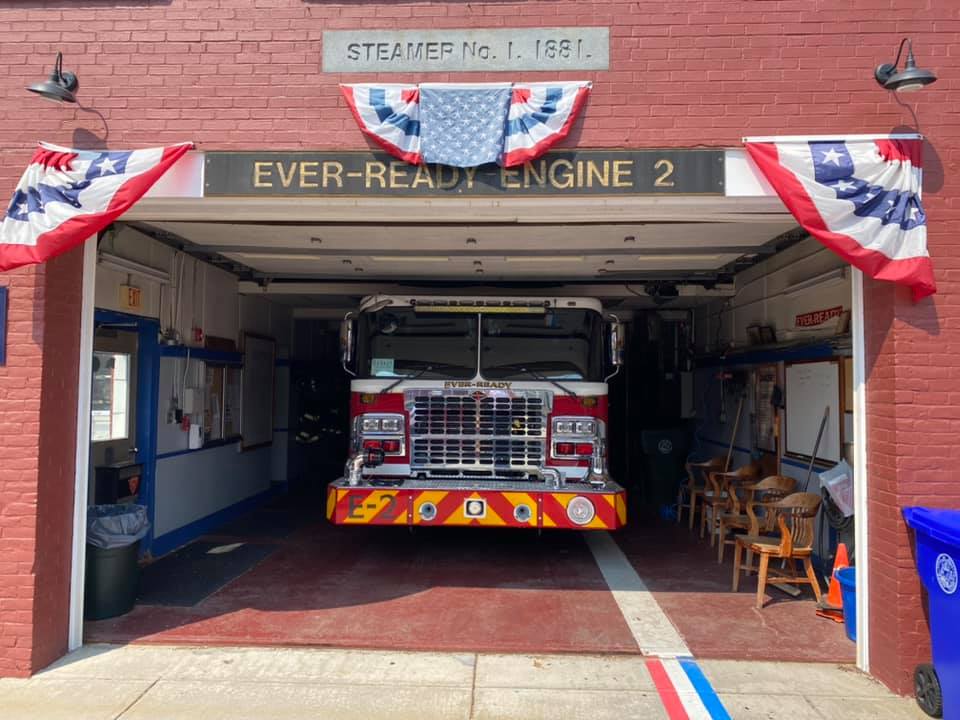 Ever-Ready Engine and Hose Company No. 2

On August 13, 1923, an issue arose that would put an end to the King Philip Company Number 1. A special meeting was held to consider whether the company would attend the New England League Muster at Crescent Park. During the meeting, 3 applications for membership were presented and accepted for membership.

On May 19th, 1924, the Board of Engineers recommended to the Town Council that authorization be given for the King Philip Fire Company to organize a new Company. On the May 24, 1924, a new fire company of thirty members was founded. These were younger members of the King Philip Company. On June 4, 1924, the new company would finally receive its name, the Ever Ready Engine and Hose Company Number 2.

Battalion Chief of Safety and Training